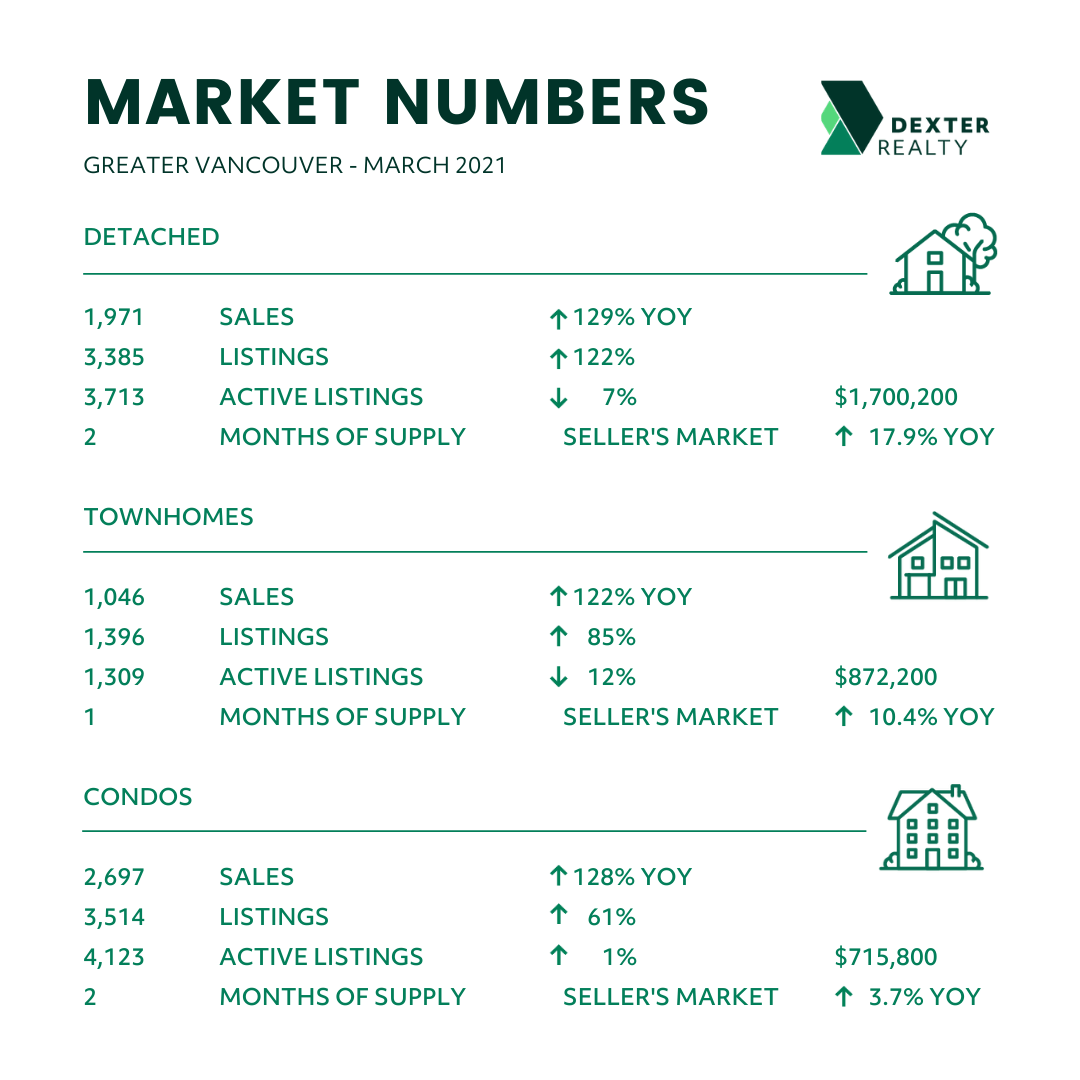 March housing sales skyrocketed more than 126% higher than in March 2020 – the month the COVID-19 pandemic began – to the highest monthly sales pace ever recorded in Greater Vancouver.

The unprecedented action of 5,843 sales in the month – more than 174 sales every day – blew past housing forecasts and eclipsed the former all-time sales record set in March of 2016, long recognized as the peak year for housing sales in the region.

Dexter Realty's Insights into What to Expect for the Future

We and other Dexter agents have been running on the frontline of the current pace, and we are detecting some buyer fatigue, which is understandable. Dexter economists add "This market can’t continue at this level forever and, as we’ve seen in previous years, March can be the high point of the year for housing sales. There could be some truth in that theory, but this year and this market is consistently shattering all the traditions."

We believe there is one wild card yet to be played and it could shift the housing market into hyperdrive later this year. This is a potential rebound of international buyers and immigration, which were credited for sparking high home sales in the mid-1980s and in 2016-18 and could do so again in 2021.

In March of 2020 foreign buyers accounted for 24 residential property transactions in Metro Vancouver, despite the provincial 20% tax on homes. But, after COVID-19 travel restrictions hit, that dropped to single-digits per month. We believe pent-up demand and a war chest is building and it could be unleashed on the Vancouver-area housing market later this year.

For instance, according to recent report from the Financial Transactions and Reports Analysis Centre of Canada (FINTRAC), $43.6 billion was transferred from troubled Hong Kong to Canada in 2020, and this, FINTRAC said, does not include transfers via cryptocurrencies, between financial institutions, or transfer under $10,000.

As well, Canada was posting the highest population growth in the developed world prior to COVID-19, according to Statistics Canada, with its 1.4% annual growth rate in 2019 more than twice as high as the U.S. and Great Britain, which tied for second place. The Canadian government has increased its annual immigration quota to 400,000 people per year. The inflow has been stalled by the pandemic but when that ends the rush into Canada will begin. Wild as the current Metro Vancouver market is right now, it may be the calm before the storm.

And with some calls to cool the market, and concern over low interest rates creating challenges when rates do eventually rise, we have to remember that Canada has one of the soundest lending practices in the world and with the current Stress Test in place, buyers are qualifying at rates much higher than we are seeing in the market place right now. So, while demand side measures are easy for governments to tinker with and implement, supply side realities need to be a focus or this rush of demand will once again be pushed into the future and create challenges yet again.

View the current rates   or request our list of great mortgage professionals to get pre-approved and receive their daily deal.

What Does This Mean To You?

Depending on what you're buying or selling, there are many opportunities for both buyers and sellers in today's market.

Every neighbourhood and home is unique. So, as your real estate professionals, we're always here to help. We can fill you in on what’s happening in your local market, help you determine what type of homes you can purchase, provide the current value of your existing home and provide a clear idea of the properties currently available.

You don’t have to try to figure things out on your own! We're here to help.

Even if you’re just at the “thinking about it” stage, we recommend getting the information you need now. That way, you’ll be prepared to make the best decision when you’re ready.

So, How Are We Conducting Our Business to Keep Everyone Safe?

As real estate is deemed an essential service by the government, we're able to continue to help clients buy and sell real estate during Covid-19.

As always, the safety of our clients, community and all those involved, is our top priority.

Therefore, we’ve implemented safety precautions, viewing guidelines and are working virtually and electronically as much as possible. Masks and social distancing are the new norms.

For sellers, we continue to create floor plans, videos, 3D virtual tours and high-end marketing for our listings. This is extremely important to buyers and sellers in these times. It allows buyers to preview the property from the safety of their home and determine if a private showing is warranted. Therefore, sellers will have less people viewing their home in person, but the ones who do, are more serious about their home.

Please feel free to contact us if you have any questions.

To view  all the details of the current Greater Vancouver, Fraser Valley, Vancouver West and Vancouver East real estate market statistics and graphs, just click the desired buttons below to open a detailed PDF report.

Receive Listings Before Public is Notified

"Lori completely understood my needs and her no-pressure sales approach was refreshing.  When I finally made the decision to purchase, Lori was the first call I made."  Sheryl T.

"Sold in 6 days over list price - "I highly recommend Lori and Alan for their professional services and guidance."  Jeannette B.

"Alan and Lori really kicked into high gear and they completely outshone all other REALTORS®!  Not only were we truly impressed with how hard they worked, how knowledgeable and thorough they were, how highly they held our interests, and how professionally they conducted themselves through every aspect and every moment of both transactions, they also impressed the socks off the other realtors involved!"  Mike & Scott

"I was very impressed with the professionalism of both REALTORS® and the way they made sure we were protected.  We felt very secure in their knowledge and helpfulness. Thank you for a great job and a great experience."  Frances K.